Hepatitis has been known since ancient times. The existence of jaundice and their mass distribution was well known in antiquity. In the 5th century BC e. Hippocrates wrote about a contagious form of jaundice. In the XVII-XIX centuries. during numerous wars, epidemics of jaundice were observed in the countries of Europe and America. They covered large groups of people (especially soldiers) and were accompanied by high mortality. 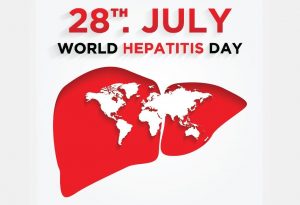 The search for the causative agent of hepatitis began in the nineteenth century. However, only in the 1940s the viral etiology of this disease was recognized.

In 1967, Baruch Samuel Blumberg, an American physician and scientist, discovered the hepatitis B virus and received the Nobel Prize in Physiology or Medicine (1976) for his work on the virus. It is on the birthday of this scientist that World Hepatitis Day is celebrated. The hepatitis C virus was discovered in 1989.

According to various estimates, the number of patients with viral hepatitis C is more than 150 million people. Each year, about 350,000 of them die from hepatitis C-related complications, including cirrhosis of the liver. Currently, serious problems associated with this infection are obvious: a high incidence of chronic forms, a long asymptomatic course, manifestation of the disease in the late stages (liver cirrhosis), a clear association with the development of hepatocellular carcinoma.

Due to the high prevalence of the disease, screening for antibodies to the hepatitis C virus is used for early detection of infection. Diagnosis of viral hepatitis C is mandatory, in accordance with current standards and recommendations, should be carried out in the following target groups:

Pregnant women (in the 1st and 3rd trimesters of pregnancy).
Recipients of blood (its components), organs and tissues (if infection is suspected and within six months after transfusion of blood components).
Personnel of medical organizations (when hiring and then once a year).
Patients before admission for planned surgical interventions (not earlier than 30 days before admission).
Patients with chronic diseases, including those with liver damage (during the initial examination).
Patients of narcological and dermatological and venereal dispensaries (when registering and then at least once a year).
Contact persons in foci of acute and chronic hepatitis C (at least once a year).
Persons belonging to risk groups for infection: injecting drug users and their sexual partners; sex workers and their sexual partners; persons practicing same-sex sexual contacts and their partners; people who have a large number of casual sexual partners.
Persons in places of deprivation of liberty (upon admission to the institution).
Donors of blood (its components), organs and tissues, sperm (with each sampling).
Children under the age of one year born to infected mothers (aged 2, 6, 12 months).
Patients with immunodeficiency (oncological, patients on hemodialysis, on treatment with immunosuppressants, etc.).
Patients with liver disease of unknown etiology (during the initial examination).

After detecting antibodies during a screening examination, an analysis is prescribed for the detection of hepatitis C virus RNA by PCR for the final confirmation of the diagnosis. In addition, the virus genotype is determined for the selection of therapy. In parallel, they monitor the current state of the liver, control the level of transaminases, bilirubin and other indicators of liver function. Liver elastography is used to determine the degree of fibrosis or the presence of cirrhosis.

A big problem is the combination of viral hepatitis C with other diseases, especially with viral hepatitis B or D, diabetes mellitus, thyroid pathology and other diseases that make therapy difficult. With the advent of new methods of treatment, namely interferon-free therapy, this problem has faded into the background. Another complication associated with viral hepatitis C is extrahepatic (i.e., not involving the liver) manifestations of the disease. The most common of these are mixed cryoglobulinemia, inflammation of small vessels, Sjögren’s syndrome, thrombocytopenia, lichen planus, porphyria, erythema necrolitica, insulin resistance, diabetes mellitus and diabetic nephropathy, autoimmune thyroiditis, B-cell lymphoproliferative disorders. Despite the above difficulties, today the treatment of viral hepatitis C has moved to a new level, both in terms of efficiency, and in terms of ease of use and the absence of side effects.

In medical practice, unfortunately, there are still “old” therapies, such as short interferons, which have low efficiency and a lot of side effects. There are pegylated interferons used with modern protease inhibitors and have not lost their value. Triple therapy with interferon, ribavirin and an additional antiviral drug is used.

Modern interferon-free therapy is rapidly replacing other methods of treatment. This is due to the high efficiency of this method (recovery is about 95% of patients without liver cirrhosis), as well as the absence of side effects during therapy, which lasts from three to six months. The only obstacle is the cost of treatment. However, this problem is partially solved due to the emergence of high-quality generics. Experts from the European and American Societies for the Study of the Liver analyzed the results of treatment with generics and came to the conclusion of comparable effectiveness.
Sofosbuvir-based regimens in combination with ledipasvir or daclatasvir, as well as 3D therapy (ombitasvir-paritaprevir-ritonavir + dasabuvir) are currently the most effective and affordable therapy regimens. The development of new drugs continues, and additional studies are being carried out on existing drugs.