On December 5, 1963, the Epstein-Barr virus was discovered, causing a lot of problems for humanity. He was hunted for three years, and it is not known how much longer he would have been hiding if the Manchester fog had not delayed the arrival of a plane from Africa in the winter of 63rd.

The hunt for the Epstein-Barr virus (EBV), the causative agent of the most common and contagious infection on Earth, was started by Ilya Mechnikov. He boldly stated that cancer is “caused by a small virus that is not visible even with the most powerful microscope.” Even during the life of Mechnikov, it was proved that chicken sarcoma really has a viral nature.
Michael Anthony Epstein (in Russian he is called Epstein for some unknown reason) was born 10 years after this discovery. He had a chance to work in a new era, when electron microscopes had already made viruses visible. Epstein was engaged in looking at the chicken sarcoma virus through an electron microscope when, out of pure curiosity, he came to a lecture by the famous “savannah surgeon” Denis Burkitt. 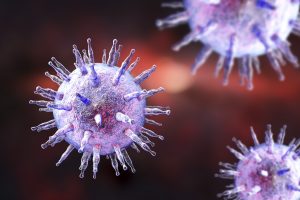 He talked about a terrible East African disease that disfigures and kills children. This malignant tumor is called Burkitt’s lymphoma. Among other things, the “savannah surgeon” said that she comes to the kingdom of Buganda during the rainy season.

With these words, Epstein suspected the infectious nature of the tumor, by analogy with chicken sarcoma. The rainy season is a time of rapid reproduction of vectors, no matter who they are: mosquitoes, mosquitoes or ticks. Since Burkitt saw nothing special in the histological specimen under a normal microscope, it means that the causative agent is not a bacterium, but a virus.

Epstein asked African pathologists for a sample of Burkitt’s lymphoma. Alas, under the electron microscope, the drug looked trite, no viruses. They tried to cultivate an unknown pathogen in chicken embryos and on kidney cells, like the already discovered polio or measles viruses – to no avail. Three years were wasted: the African colonies had already gained independence, the ruler of Buganda became the president of sovereign Uganda, and Epstein was still struggling with his hypothesis.

In December 63, the next sample was transported for too long. Fog delayed the plane arriving in Manchester for almost a day, until the evening of the 5th. The tumor from Entebbe seemed to have gone rancid along the way, floating in a cloudy, foul-smelling liquid. And yet graduate student Yvonne Barr, who prepared drugs for Epstein, did not pour out this goo. She suggested that the turbidity is caused by the growth of unknown bacteria. Maybe it was they who led everyone by the nose for three years.

But the turbidity was created not by bacteria, but by quite viable cancer cells, which separated from the edge of the tumor and set sail. Looking at these cells through an electron microscope, Epstein immediately noticed the familiar outlines of herpes viruses inside them.

It is amazing: the viruses did not destroy the cells in which they multiplied, but it seems, on the contrary, they helped them grow and multiply. Epstein was so excited that he dropped the microscope and ran out into the street – he had to take a walk to get his head working again. It was snowing in large flakes, calming the soul, and in half an hour the confusion passed. He was replaced by a terrible thought: what if the electron beam of the microscope burned a unique sample? But the viruses felt great. There were even more of them in sight – not 5, but 9. There was no doubt: this is a new, special species in the family of herpes viruses.

As soon as they do not write its name: “Epstein-Barr virus”, “Epstein-Barr virus”, “Ebstein-Barr virus”! All this is wrong. Epstein and Barr are two different people, and Barr is also a woman, her last name is not inclined. Both deserve a place in our memory. They uncovered the secret of the origin of dozens of diseases. Firstly, infectious mononucleosis, or kissing disease, is entirely on the conscience of VEB. Secondly, the most common tumor among Chinese women, nasopharyngeal cancer is also his work, and this is a huge sacrifice. Chronic fatigue syndrome, as it turned out, is not an invention of lazy people, but the result of the Epstein-Barr virus. As well as systemic hepatitis, and multiple sclerosis. Not to mention sore throats and herpes.

Perhaps the Epstein-Barr virus https://en.wikipedia.org/wiki/Epstein%E2%80%93Barr_virus is our most cunning enemy. He knows how not to kill host cells, but to cooperate with them, and even in different organs. The dossier on him swells day by day. Blame and autoimmune diseases, and stomach cancer, and parkinsonism. The investigation is not over. The criminal walks free while the vaccine against him is in the stage of clinical trials. But at least we know him by sight.