The state of blood vessels can greatly affect the functioning of the brain, according to a new study by a group of scientists from the University of Edinburgh. They found that a range of factors, such as smoking, high blood pressure, and diabetes – all factors associated with the risk of cardiovascular disease – can also have a negative effect on the brain.

Over time, this can lead to poor brain function and a risk of developing Alzheimer’s disease or other forms of dementia. The study is based on MRI data from 9772 people aged 44 to 79 years. 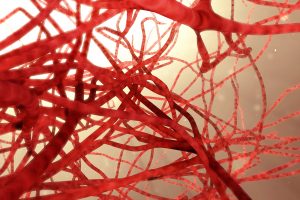 A group of scientists led by Dr. Simon Cox conducted a study of the relationship between risk factors for cardiovascular disease – smoking, hypertension, blood pressure, diabetes, high cholesterol and body mass index – and brain structures responsible for thinking. It is these areas of the brain that are primarily affected in the development of dementia.

To determine the effect of these factors on the brain, the researchers compared MRI scans of the brains of people of similar age and gender with similar head sizes. It turned out that all of the above factors (except cholesterol) showed the most stable relationship with the loss of brain properties, as well as a decrease in the amount of gray and white matter of the brain.

The researchers were able to use brain scans to calculate exactly how much brain matter was “lost” due to the presence of risk factors for cardiovascular disease. It turned out that patients with the highest risks had an average of 18 milliliters (that is, 3%) less gray matter than patients with no these risks.

Gray matter is the brain tissue that contains the cell bodies of neurons. The main function of gray matter is the control of muscle activity, sensory perception, and cognitive functions. A decrease in the number of neurons in the gray matter leads to a slowdown in reactions and information processing by the brain.

In addition, people with high cardiovascular risk were one and a half times more likely to have abnormalities in the white matter of the brain, which is deeper inside the brain than the gray matter. White matter naturally decreases with age, but previous studies have found a decrease in white matter associated with a deterioration in mental abilities. Increased vascular risks can speed up this process.

Changes in the brain associated with vascular risk factors manifest themselves differently in different parts of the brain, but scientists have found that atrophy most of all captures precisely those areas that are responsible for cognitive functions. According to Cox, these areas affect the ability to think complex, and are also associated with dementia and Alzheimer’s disease.

It is clear that as the body ages, the brain gradually loses its functions: the perception and cognitive abilities of a person become worse. However, the researchers found that all the benefits of youth are negated in those people who have high vascular risks. “These patients show brain changes even if they are otherwise perfectly healthy,” Cox notes. “And these changes are very similar to the changes that come naturally at a much older age.”

“Our behavior affects the health of our brain, regardless of age,” said Dr. David Merrill, a neurologist and geriatric psychiatrist at Providence Saint John’s Health Center in Santa Monica, California. – That is, even at a young age, it is worth thinking seriously about such bad habits as smoking, a sedentary lifestyle, overeating or eating unhealthy foods. All this, even in youth, can lead to serious changes in the brain and nervous system. This is a very important study and its results should be a wake up call for those at increased risk of cardiovascular disease associated with smoking, high blood pressure, diabetes and obesity,” said Guy Mintz, Director of Cardiovascular Medicine and Lipidology at Northwell. Health’s Sandra Atlas Bass Heart Hospital in Manhasset, New York. “These factors are associated with poor brain function. The cause of these deteriorations is most likely due to damage to the blood vessels.”

Scientists believe that it is never too late to prevent such changes and reduce the risks of cardiovascular disease. To do this, you need to change your lifestyle. For example, consider the following tips:

Move more. At least 150 minutes of exercise per week. Even if you can’t do it regularly, it’s okay. Merrill cites as an example one study in which sedentary older people took part in an experiment – for a year they regularly took long walks. As a result, their memory abilities have improved significantly.

Add strength training. Gymnastics, along with strength training at least 2 times a week, strengthens the heart, as evidenced by Merrill: “Now we know that this type of activity has a high probability of positively affecting the brain.”

Maintain a heart-healthy diet. In addition to choosing healthy foods for the brain – blueberries, nuts and fish – you need to reduce the consumption of frozen prepared foods and smoked deli meats.

Think about your condition. Anxiety https://en.wikipedia.org/wiki/Anxiety and stress greatly affect not only the mental state of a person, but also physical health, including the brain.

Sleep enough. Lack of sleep seriously affects health, including the risk of cardiovascular disease. The brain may not have enough of those few hours of lost sleep to renew neurons and synapses.

Next: “We’re the same blood”